Well I must say that this was a fine choice for the book club as it created no end of talking points and cultural references. The blurb simply reads:

“Jack is five. He lives in a single, locked room with his Ma.”

The premise of the book is just that, Jack was born in ‘Room’ and the story follows his daily life with his mum in what is essentially human captivity. It is not at first explained why they are locked in the room but it gradually becomes clear and you slowly become immersed in life inside ‘Room’.

Personally I really didn’t like the book for the first 100 or so pages, as I have never been a fan of stories written from the perspective of a small child. Although it’s a clever concept, I find it quite tiresome as a style of writing and got a bit fed up with the constant references to everything as a noun with a capital letter; Bed, Wardrobe, Sink, Door. But all of a sudden it took on a completely different direction and I started to really enjoy it. In time you start to empathise more with Jack and forgive him for his limited speech, even find it endearing once you start to really take in the fact that ‘Room’ is the only home he has ever known and therefore the one wardrobe is the only one he has ever seen. Within a mere few pages the book suddenly becomes a real page turner and difficult to put down, you genuinely do want to find out what happens next.

Emma Donoghue herself has said that the book is heavily inspired by “the Fritzl family’s escape from their dungeon in Austria” and it’s easy to see why. The concept of the story is horrific and made even more terrifying by knowing that it’s not just a figment of someone’s twisted imagination, things just like this have happened in the modern, Western World.

This was a great book, and a very unusual idea for a story. There were various things left unsaid and unexplained, like why she was taken in the first place, and what happened to the kidnapper in the end, but these are small details which can easily be left to the imagination of the reader. Overall the focus of the story was not on why it happened, but how it was dealt with by the victims. One of my favourite aspects of the book was that it wasn’t just telling the story of a terrible ordeal, it also explained what happened after the ‘rescue’, something which I think is missing from a lot of stories about difficult or traumatic events. It seems to be commonly assumed that once someone is rescued from captivity or trauma, normality is restored and there is no more pain or sadness, but this is almost certainly not the case and I think Emma Donoghue captures this beautifully in the aftermath of their ‘escape’ from Room.

Room was definitely enjoyed by all in the Book Club and is a book I would thoroughly recommend to others. It is thought provoking and a great talking point, and if nothing else will make you enormously appreciate your own freedom and what you have. 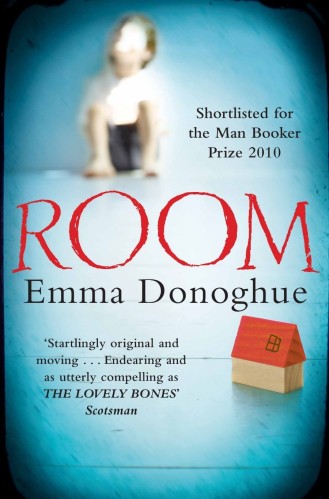 One thought on “Room by Emma Donoghue”