So the latest book for the book club was an interesting one. The reviews for We are all Completely Beside Ourselves were outstanding; ‘Readably juicy and surreptitiously smart’, ‘A strong, unsettling, novel…’ and ‘A dark, cautionary tale’ to name just a few. None of us knew anything about the book other than what we’d read, but based on the reviews and the mysterious nature of the story, we were all intrigued and willing to give it a go.

Now, this will be a difficult review as the key twist (the page 77 ‘reveal’) absolutely must not be mentioned. This would be quite the plot spoiler and completely ruin the entire first half of the book! So suffice it to say that none of us were expecting the twist that was sprung upon us, and several of us were so surprised that we had to put the book down for a few days to consider whether we wanted to carry on! Essentially the book follows the life of a girl named Rosemary who used to have an older brother and a sister the same age as her, both of whom have now disappeared; something she has found, and is still finding, very difficult to deal with.

The story is written in the first person by Rosemary, now an adult, talking the readers through her very unusual childhood and the reasons for the oddities, often discovering things herself along the way. She talks directly to the reader, which some of us liked and others really didn’t, but takes the unusual path of starting in the middle, then moving back and forth through her own memories and the things she discovers as she gets older, and finally finishing in the present. The story is highly unusual and quite unique in both the storyline and the way in which it is written, and was received in very different ways by many members of the book club. Some really didn’t like it, found it too strange and almost rather smug in the way it was written, whereas others thoroughly enjoyed it, finding the story really quite moving and thought-provoking. One of the points discussed was the way the author introduced seemingly pointless characters and objects, and went in to great detail about events which seemed to have absolutely no relevance to the story, yet it was pointed out that these apparently unrelated and unnecessary additions were perhaps a clever way of giving us an insight in to the personalities of the characters through their acts and thoughts. This was something many of us had missed/ignored and demonstrates perfectly how a book club can show you the side of a book you never would have spotted on your own!

It is most certainly a great example of a book which people will have very differing opinions about. It’s probably the most controversial book we have chosen so far in that there were some quite strong opinions in both directions, a great choice for a book club! Again it’s very difficult to explain these different points of view without giving away the secret of the story! Some couldn’t put it down, others found it difficult to pick up, demonstrating beautifully the wonderful variety of human thoughts! The World would be a much duller place if we were all the same!

Try it for yourself, it’s the only way! 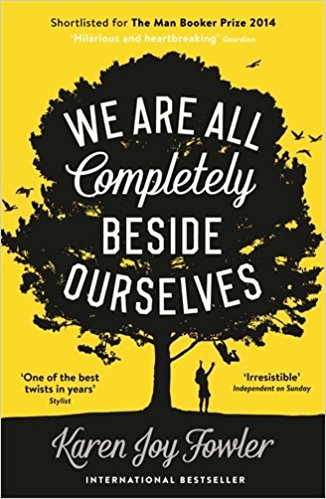 One thought on “We are all Completely Beside Ourselves, by Karen Joy Fowler”