I love languages, they are endlessly interesting, and I am always comparing and questioning different aspects of language. In particular I love the English language. This probably has a lot to do with it being my first language, and also the fact that I spend a lot of my time teaching English to foreign students… ! But even so, I think it’s a fascinating language; so complex, so expressive, and much of it with seemingly no rules at all!

Teaching advanced English has been a very interesting experience for me as it has really made me stop and ponder questions that as a native speaker I would never even consider. It also makes you realise just how many mistakes we make as native speakers, mistakes which have, over the course of time, become acceptable. With the enormous rise in popularity of blogs, I find myself seeing more and more mistakes, and not just typos – we are all guilty of occasionally typing too quickly and not having time to proofread – but serious grammatical errors that are clearly not thought of as incorrect by the writer. Why is it now ok to say “there’s lots of people?” Spoken slang is one thing, but I can’t tolerate poorly written English. Another of my favourites is “I should of gone home earlier”. We all went to school and learnt how to read, write and speak. No wonder so many foreign speakers find English so difficult to learn.

And don’t even get me started on apostrophes. Why do so many people think if a word ends in ’s’, it must need an apostrophe? 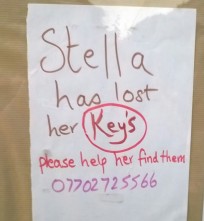 The list is literally never-ending; outside bars, restaurants, even at universities. True story, I once saw this sign at a British university:

Just for the one student then?

Apostrophes have very simple rules, we all learnt them at school, yet it seems most people have completely forgotten them by the time they reach adulthood.

I would never claim to always use flawless spoken or written grammar, far from it, but I think laziness, far too much time spent typing on phones, and the rise of slang is starting to destroy our language. And what a beautiful language it is, I hate the thought of it slipping away. If grammar is not your strong point, no problem, but just ask someone to check it before you publish it!

Then there are occasionally grammar points which present themselves and become the subject of debate, such as the following safety precaution commonly found on the back of headrests on aeroplanes. Is one right and one wrong, or are they both acceptable? And if they’re both ok, why?!

It’s a wonderful language, but it could be made a whole lot easier if there was just one word for something, rather than 10, and if each word just meant one thing, not 10…!