So I’m afraid I’ve had a bit of a summer break, but I’m back, and despite it feeling like a very long time ago now, I would like to journey back to our American road trip this summer. We try and do at least a 10 day road trip in the States every summer, simply because we love it. It is a country with endless adventures, you could spend multiple lifetimes there and still only scratch the surface of its diversity. Coming from Europe it’s hard to get your head around a land mass that size which is all one country, over here we are so used to being able to hop on a plane and be in another country in little more than an hour. And not just a different country, but one with a totally different language, a new culture, a completely different climate. And while that is just wonderful, the grass is always greener isn’t it?! What you haven’t grown up with is always intriguing and exciting, and it kind of blows my mind that in America you can drive in a straight line for 10 hours and still be in the same state!

I just love the American open roads, the big skies, the sheer enormity of it, the emptiness. Europe is SO full, especially in the summer. You cannot pitch your tent on a public campsite and be more than 5 meters away from the tent next to you. And try driving anywhere on mainland Europe in July and August without being stuck in dreadful traffic and adding at least a couple of hours to your journey. Away from the cities, the States is simply empty. During the week it’s not uncommon to have an entire state campground to  yourself, and as for the wilderness areas, wow, uninhabited wild spaces that size are just mind boggling, and it almost makes me feel worried that I’m never going to have the time or opportunity to fully explore even a fraction of these incredible places.

So enough of my rambling, this trip saw us starting in Seattle and finishing in Portland, Oregon, in between managing to explore a bit of the Olympic Penninsula, stay on a horse ranch in rural Idaho and journey across Idaho and Oregon, taking in some incredible places, including Boise, Bend, Smith Rock, deserted campgrounds, empty lakes, and of course those endless skies.

If you ever plan a trip to the States I can’t recommend road tripping enough. It is by far the best way to see the country. We didn’t really have a set plan, just followed the weather and went wherever took our fancy. The roads are enormous and there is never any traffic, which means that rather than being a chore, the journey to a new destination is all part of the fun, in fact it’s thoroughly enjoyable! Crank up that country music and sit back and relax under those big, open skies… 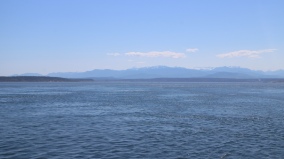 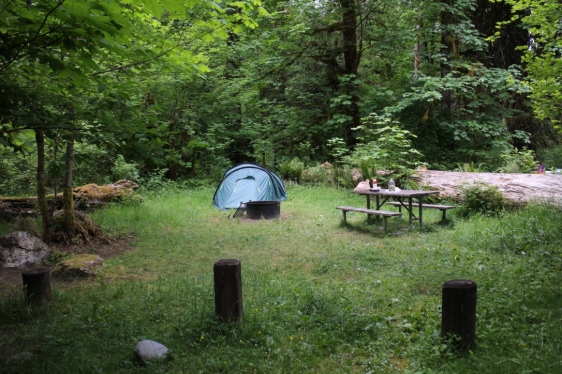 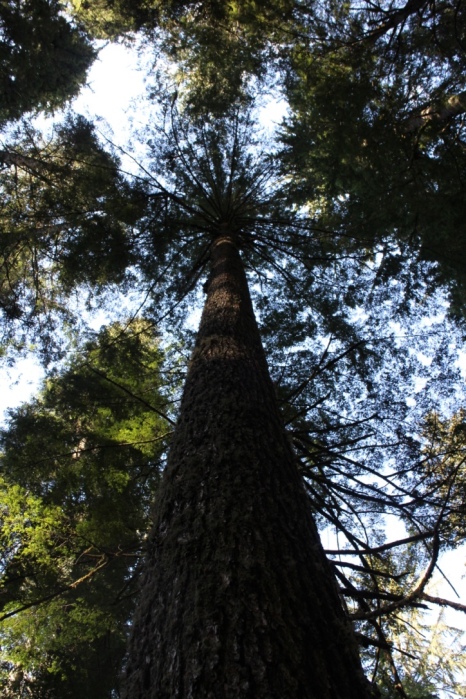 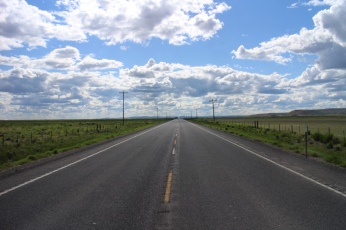 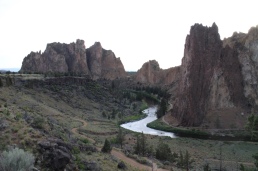 It’s a commonly discussed fact amongst Brits that ‘70% of Americans don’t even have a passport’. Whether or not this is factually correct nobody is really sure, but it’s one of those ‘facts’ that everybody seems to know, most likely because living in Europe, the thought of not owning a passport is utterly ridiculous.

2 months ago I think I would probably have agreed, how could anybody live without owning a passport? Flying is so commonplace for us Brits, and with our country being so small, to fly pretty much anywhere means to leave the country. Our passports are somewhere close by at all times. For many years I lived in France and worked in Switzerland, so crossed the border twice a day without giving it a second thought. But I must admit that spending some time travelling around the States has made me view the no passport issue in a completely different light.

The USA literally has everything you could ever need with regards to landscape, climate and sports. It has coastlines and beaches, mountains, deserts, lakes, snow and sun; meaning that every sport from skiing to surfing is possible somewhere in the States. Within Europe, if you wish to ski, you need to fly to a country which has mountains and snow, if you want a beach holiday, countries such as Spain or Greece are an obvious choice. People in Europe take it for granted that they can jump on a plane and in less than 2 hours be in a completely different climate, scenery, culture and language. But what they forget is that the entire continent of Europe could fit neatly in to the outline of the USA with an enormous amount of room to spare. The distance from one side of Montana to the other is approximately 560 miles. As a comparison, if you were to start in Milan, Italy, and drive north east for roughly the same distance, you would cross Switzerland, Lichtenstein and Germany, finally ending your journey in Prague, deep in the heart of the Czech Republic. That’s 5 European countries versus not even leaving one of America’s 50 states.

Many Europeans would consider themselves well travelled, worldly people, after all, they may visit 2 or 3 different countries each year. Yet although it would be an impossible statistic to calculate, I would be very interested to know the percentage of Europeans who have never left Europe. I’d guess the vast majority. Europe contains approximately 50 countries (debatable due to questions such as whether to class the UK as one country or 4 separate ones), the USA contains 50 states. I would hazard that most Europeans rarely leave Europe, most Americans never leave America. It’s really not that different. Europe is made up of countries, the USA of states. It’s a big expense and a long journey to leave Europe and travel to Australasia, Asia, Africa or America, so we tend to stay within the confines of the continent. This is presumably no different for Americans. If you live in Texas and want a ski holiday, why fly to France when you have Colorado just a short flight away?

Being in the States also brought it home to me just how unique the European Union is. I completely take it for granted that despite being British, I’ve lived in France for the last 9 years, worked in Switzerland for the past 4, and am about to move to Austria. No visas needed, no green cards and no need to make a special application. You can move around freely within all the countries in the EU, working and living. In no other place in the World does this happen, and we are so very fortunate that we have this available to us.

Put in perspective it becomes a lot more clear why so many Americans would choose to stay within the States. Europeans must simply count themselves lucky that they have such a diversity of cultures at their doorstep and the freedom to move around amongst them, and cut their American friends a bit of slack!

It’s astonishing how much wildlife there is to see in America, everywhere you look, the outdoors is simply teeming with it. And, it’s all enormous! Every creature from the large to the small was oversized, even down to the flies! 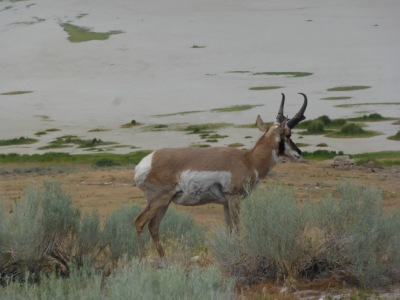 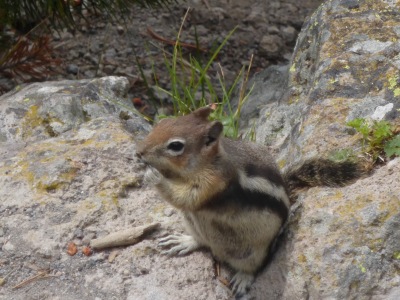 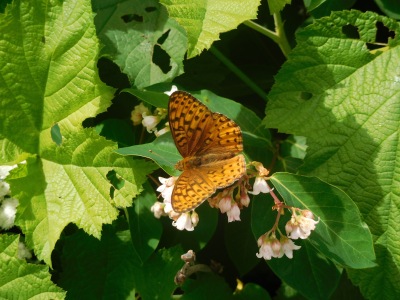 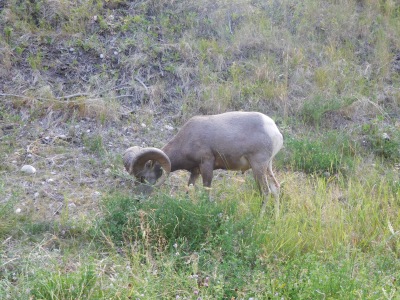 One of the most commented on sights throughout our US road trip was not just the amount, but the sheer size of the RVs flying along every highway. I guess being British we’d notice them a lot more as we simply don’t have vehicles like that where we’re from. For starters they simply wouldn’t fit on the roads. Your average European road is firstly too narrow and secondly, far too busy! I would love to see one of these trying to fit down a narrow country lane in rural Wales! (in fact the pick up trucks alone wouldn’t fit, let alone an RV!) But not only are they enormous, I also observed that when stationary, they also extend out to all sides and angles, making them even more gigantic. And much to our delight, we also spotted many of them towing a 4×4 truck behind them.

It put our tiny tent to absolute shame on the campgrounds; I’d hazard that some of them are considerably bigger per square metre than many residential apartments, especially those found in either ski resorts or large cities. We loved watching these blast through Montana, Idaho and Utah in their thousands, but it really did leave us wondering, just how much space does an average couple need when on holiday??!

I’m on holiday in the States at the minute with very little access to the internet, but I had to jump on and include one of the highlights of our road trip so far – a Baseball game! Being Brits we have no idea of the rules of baseball, let alone having ever seen a game live, so whilst in Montana it was a must to go and catch the Missoula Ospreys playing at home. We picked up the rules fairly quickly (with the help of some fans behind us!) and had a fantastic evening soaking up the atmosphere of a true American sport. What a great night. So far we’ve travelled from Alberta, Canada, through Montana, Idaho and Wyoming. This country is awesome! Much more to come!